“Assamese women weave dreams into their looms” were the words stated by the Great Mahatma Gandhi for the prominent silk weaving centre of Assam – Sualkuchi. It is a small township about 36 km away from Guwahati, Assam on the northern bank of Brahmaputra.

It encapsulated Kautilya the revered Indian educator and political theorist of the 4th century so much that its mention can be found in Kautilya’s ‘Arthashastra’ by the name of Suvarnakudya of ancient Kamrupa where the best quality of the patrorna handloom (Pat silk) was produced in the 4th century.

The gateway to Sualkuchi village highlights the unique features of Assamese culture through the traditional attired figures dancing Bihu, to the colourful Sadors with motif filled borders laid out on top and the Assamese women figures shown weaving silk through the traditional wooden weaving loom. The gate was built to also commemorate Mahatma Gandhi’s visit here in 1946 as part of the Swadeshi movement. 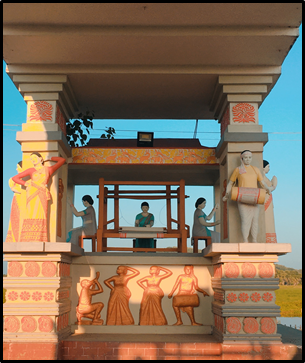 I visited the picturesque village this month to understand the handloom history of Assam and its current status in relation to the modern-day clothing and apparel industry.

The practice of weaving in Assam can be traced back to the 4th century BCE. Kautilya has in fact mentioned few principalities of ancient Assam (Kamprupa) such as Joapa, Yonga, and Suvarnakudya where several valuable royal treasury products were manufactured. Out of these, Kautilya identified Suvarnakudya which later came to be known as Sualkuchi as the centre of the silk industry.

Originally, this village was a crafts village where several cottage industries like handloom
weaving, pottery, gold making, and oil processing flourished. Over time, the others failed to adapt to the changing times but handloom weaving continued to enjoy economic success.

This ancient practice was sponsored by King Dharma Pal of the Pal dynasty around the 10th-11th centuries by habituating the Tanti community of weavers in this village.

However, the most glorious development of this industry and this village took place under the Ahom reign. Sualkuchi is a silk weaving village that was established in the 17th century by Momai Tamuli Barbarua, a great administrator of the Ahom Kingdom during the reign of King Swargadeo Pratap Singha (1603-1641). The village took shape as a weaving village when the Ahoms occupied Sualkuchi by defeating the Mughals in the mid-17th century. Patronised by the Pal and the Ahom kings, the craft established itself and during that period, it was a luxury afforded only by the royalty and the noble families of Assam.

The weaving industry of Sualkuchi received a major boost during the Second World War when cloth making increased manifold.

An attractive feature of weaving at Sualkuchi is the engagement of the whole family into the profession. The weavers mostly do not have any institutional background in handloom weaving. They learned the art of weaving from their parents with regular practice. The reason being almost all houses have the weaving loom in the backyard.

In order to understand the significance of Sualkuchi to India’s handloom power, it is important to map it to the larger context of India’s weaving industry. The textile and clothing industry is one of the earliest industries to have developed in India.

It is believed that India stands first in terms of having the largest numbers of weaving looms in place accounting for 64% of the globally installed looms!

Its inherent and unique strength is tied to heritage as Sualkuchi produces silk fabrics ranging from the Golden Muga (gold colour silk), the Ivory White Pat (white and off white silk), and the Light Beige Eri (warm colour silk). Out of which, Muga and Eri Silk are native to only Assam in the world!

These are some of the pieces of Muga Silk (golden silk thread work) Mekhela Chadors that are made in Sualkuchi. The motifs are intricate as a result of intensive handiwork by the weavers.

Ever wondered how the motifs are made? Punched cards with gorgeous woven motifs. These pre-arranged motifs are first drawn on graph papers. Then holes are punched on rectangular cardboards along the lines of the design to make the punched cards.

The woven motifs are mostly inspired by the flora & fauna found in the state, ranging from various flowers to peacocks, deer & rhinos, ‘Jaapi’, or the traditional Assamese hat. Weaving one piece takes about six days and sometimes more depending on the design. During the period of the royalties, only golden zari was used for motifs but now silk and even cotton threads are used for the motifs.

Out of the three types of silks indigenous to Assam, the Muga silk is naturally golden in color and is known for its durability, often outliving its owner. This silk is produced by the silkworm Antheraea assamensis. It is known to become glossier with each wash.

The Pat silk is ivory white in color and is produced from the Bombyx textor silkworm. The light beige Endi or Eri silk is produced from the Samia cynthia ricini and is also known as the ‘Ahimsa silk’ as its production allows the development of the pupae into adults and then only the open-ended cocoon is utilised for silk manufacturing.

In my personal interaction with one such woman weaver in Sualkuchi, I got an opportunity to get a glimpse of their weaving occupation. A typical weaver sits in the loom from 9 am to 1 pm with a break in between and again from 3 to 10 pm with a break in between. The women weavers outnumber the male weavers. The golden silk threads are often left soaked in water before use so that the colour remains intact.

Silk Weaving in the 21st Century

Sualkuchi is a silk heritage village that has immense tourism potential in the 21st century. The impact of the Covid pandemic has been manifold across the world but for the weavers, it is not just a health crisis alone. It is more of a livelihood hazard and a socio-cultural calamity.

Since the handloom industry falls under the unorganised sector of 90% of India’s economy, the future is marked by unprecedented uncertainties. Weavers are incurring huge losses and are also under heavy debt. One of the major problems that the weavers have been facing is the unavailability of raw materials. Even those weavers who are associated with organisations face a shortage of necessary raw materials like yarn. Wearing hand-woven clothes is part of many festivals like Bihu and Bisagu. Thus, the economic crisis in the handloom sector can very well be seen as a cultural loss too. Without a persistent pool of buyers, weavers are hesitant to work.

Another growing issue has been protests of Assamese weavers against the sale of artificial silk or Benarasi silk with Assamese motifs in the name of Sualkuchi silk. This has become very common now due to increased commercialisation where many apparel showrooms sell cheaper and duplicate silk mekhela chadors.

Importing countries like the US use the Muga silk fabric for stitching blazers and the likes while Japan uses items like umbrellas and other diversified Muga items, besides the general fabric. However, this trade transaction has stopped for now due to the pandemic.

The cultural richness and indigenous identity at a time of increased Americanisation and
globalisation are what binds us to our roots and heritage. Supporting local handlooms aligns with India’s AtmaNirbhar advocacy and #vocalforlocal initiative.